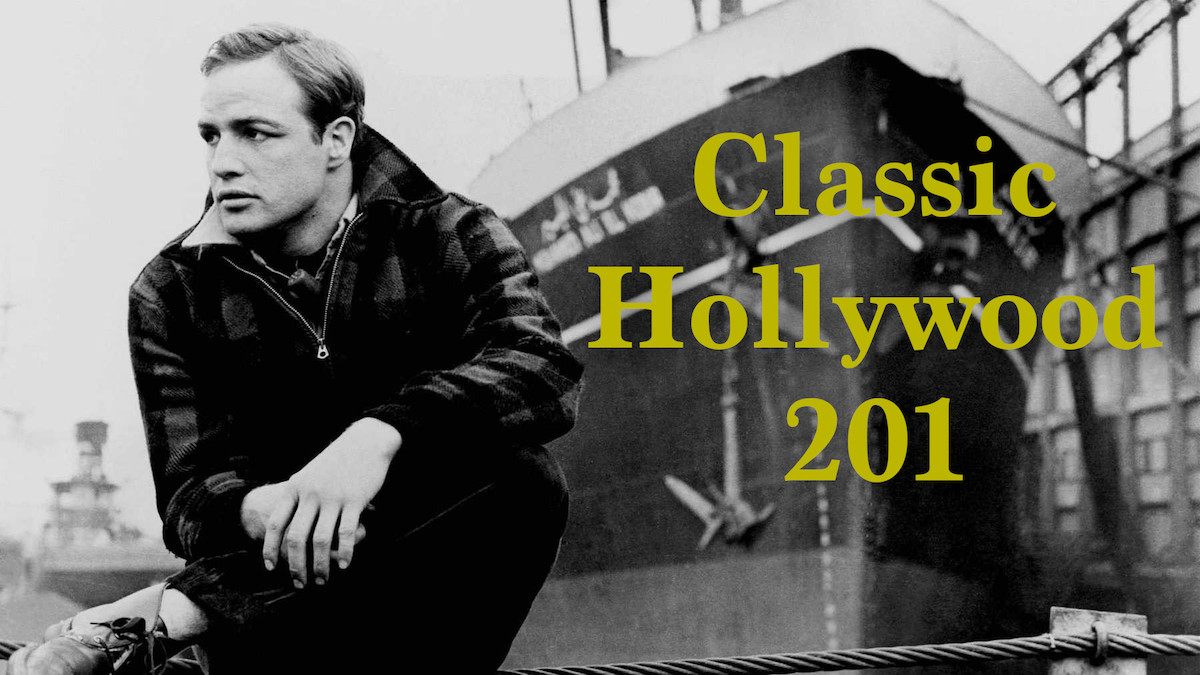 We're back to our normal schedule this week and continue our journey through cinema history. This week? Classic Hollywood 201, which means it's time for Marlon Brando.

After the Supreme Court shut down block booking, it was the beginning of the Studio System. Sure they still had a lot of control, but it was sort of akin to the advent of Free Agency in professional sports.

Stars like Humphrey Bogart set up their own production companies and released their films through the studios, giving them more control over the films that got made.

As the art form grew, innovation enabled filmmakers to tell different stories. You had fewer films adapted from plays. The language developed. Stories got a little darker, partly for the reasons above and partly because the country had just come out of World War II.

But hovering over all of it was McCarthyism, which cost a lot of good people their careers and led to one of the greatest films of the era.

The beginner option here is Harvey, which is pretty easy to find on DVD if you don't want to rent it. There's a good chance you can find it in the bargain bin at Wal-Mart.

What happens to a man when gold is at stake, when paranoia and suspicion takes over? Humphrey Bogart and Tim Holt (The Magnificent Ambersons) are hard on their luck, flat broke with hardly a peso between them when they meet an old prospector. They manage to scrape together enough cash for some supplies and head into the middle of nowhere to try their luck mining for gold.

They strike it rich and Humphrey Bogart slowly grows more and more suspicious of his partner's motives.

The parallels between this and Spike Lee's Da Five Bloods are obvious, as Spike's joint is essentially a black reboot with Delroy Lindo in the Bogart role. It's also a big influence on P.T. Anderson's There Will Be Blood .

There is a good deal of classic American cinema in There Will Be Blood, partly perhaps as a result of the fact that Anderson compulsively played and replayed John Huston's 1948 gem, The Treasure of the Sierra Madre, as he was writing the script. He set himself the challenge of attempting to make a film as simple and direct as that, saying to me that he felt that in his previous films he had never quite managed to achieve economy in storytelling.

"Tell the story! Tell the story! That's what I saw in The Treasure of the Sierra Madre. The films that I love are very straightforward stories, like really old-fashioned stuff. I've never been a fan of whimsical or confusing storytelling." With There Will Be Blood, he says, "it was such a great feeling - cutting things out, slashing away. I didn't have any desire I might have had 10 years ago to shoot every single word that I wrote." [The Guardian]

But one of the film's bigger influences on the culture?

White Heat culminates with James Cagney screaming "Made it ma! Top of the world!" and maybe you've seen that referenced elsewhere? It was in episodes of Cheers and Breaking Bad. Denzel Washington quoted it in Ricochet. But most importantly, Kevin Garnett screamed it after finally winning a championship near the end of his career (go to 1:07).

White Heat is the story of "Ma" Jarrett, the loving and devoted mother of four boys, also known as the Jarrett Gang, a collection of gangsters and train robbers and troublemakers.

Her oldest son is the leader of the gang and boy does he have some issues.

Cody Jarrett was (and remains) troubled enough to embrace all the collective cultural angst that Americans felt after World War II. He has a mother fixation that is the mother of all mother fixations. In between cold-blooded killings, he climbs onto his mother's lap to cool down from his latest emotional meltdown. [ Marilyn Ann Moss]

At times, “White Heat” feels less like a traditional gangster or cops-and-robbers picture than a criminal cousin of an old Universal Studios horror picture, about a dangerous creature for whom you feel pity, but only up to a point, and who can only roam the countryside for so long, because society can’t abide a threat of such magnitude. The notoriously wild finale, which is known even to people who've never seen the rest of the film, is reminiscent of the end of the original "Frankenstein" where the monster is trapped in a burning windmill that collapses and kills him, as well as James Cameron's two "Terminator" films, which climax in factories whose whirring, clanking gears are nearly as unnerving as the violence meted out by the combatants gathered under its roof. In the end, Cody perishes in a hell of his own making, flames rising around him, screaming to the void that death is vindication.

Writer Kim Morgan called In a Lonely Place "one of the most heartbreaking love stories ever committed to film."

Humphrey Bogart plays an alcoholic screenwriter who finds himself mixed up in a murder. It's a fantastic film noir and the less you know about the plot, the better.

If there is one key element of film noir, it is the flawed hero. That, usually joined with a distinctive visual style and tone, defines the genre. The hero is sympathetic but weak, often haunted by mistakes in the past or fatally tempted by greed or lust. He is likely to discover himself capable of evil he had never dreamed of, and is consumed by guilt and fear.

Bogart embodies this noir quality flawlessly in "In a Lonely Place." He plays a good man with a hot temper who can fly into a rage when he drinks. This gives Dixon a Jekyll and Hyde quality that Laurel awakens to, leading to later scenes of terror. The monster inhabiting him is an acting-out of self-loathing, which infects his success and dooms his happiness. He foresees his fate when he quotes to her a line just written in his new screenplay: "I was born when you kissed me. I died when you left me. I lived a few weeks while you loved me." [ Roger Ebert]

Arguably the great film ever made about theatre, All About Eve stars Bette Davis as a veteran actress determined to hold off the hot new thing.

It's notable as the film that introduces us to Marilyn Monroe, who shines in a brief role.

But this is Bette Davis' best performance in a career full of pretty good ones. It's one of the landmark portrayals of a star growing older, something that's more of an issue in Hollywood (and the theatre) for women than men.

If Monroe steals her own scenes, the party sequence contains Davis' best work in the movie, beginning with her famous line, "Fasten your seat belts. It's going to be a bumpy night." Drinking too much, disillusioned by Eve's betrayal, depressed by her 40th birthday, she says admitting her age makes her "feel as if I've taken all my clothes off." She looks at Bill and bitterly says: "Bill's 32. He looks 32. He looked it five years ago. He'll look it 20 years from now. I hate men." [Roger Ebert]

I can't recommend this film enough.

Jimmy Stewart plays Elwood P. Dowd, a man who thinks he sees a human-sized rabbit named Harvey. His family, of course, thinks he's lost his mind and that's just not going to work for them, so they try to get him committed to a mental hospital. Elwood is so kind, so gentle, so eager to get along that he's more than happy to oblige.

Harvey ran for 5 years on Broadway, where it won a Pulitzer Prize for drama. Josephine Hull played the sister trying to get Elwood committed on Broadway and won Best Supporting Actress for her performance in the film. She was only in 6 films before her death. She had a long career on the stage, but it's a shame she wasn't in more films, as she's perfect here and it's not hard to imagine her having a long film career as a character actor.

If you ask me, this is the best performance of Jimmy Stewart's career. He plays the scenes with Harvey with such precision and perfectly rides the line of Elwood being being innocent or just, you know, in need of care.

Watching this film just fills me with joy.

When you think of Marlon Brando, there's a couple of performances that spring to mind. There's A Streetcar Named Desire ("Stella!!!!"), The Godfather, and Apocalypse Now, but the quintessential Brando performance is this one. He plays failed boxer Terry Malloy, a former talent who's been reduced to working the docks under the thumb of some shady characters. The showstopper scene is the "I coulda been a contender!" scene in the cab.

The backstory here is not insignificant.

On the Waterfront was released near the end of the McCarthy hearings on un-American activities. Kazan and screenwriter Budd Schulberg both "named names" and On the Waterfront was their attempt to justify why. They made a great film, but their reputations were forever tarnished.

When Kazan was awarded an honorary Oscar, it was a highly controversial decision. There were protests outside the theater and many filmmakers either left the room for his award or refused to stand.

There's some angry faces in that crowd.

Kazan tried to justify it. He felt like he was trapped, that his career was over. He took out an ad in The New York Times to explain what he had done. Eventually he made a great film and that mitigated some of the damage to his reputation, because in Hollywood that tends to solve a lot of problems, but not all of them.

Karina Longworth of the essential podcast " You Must Remember This" has a great summary in Slate.

It seems clear to me that the source of this kind of animosity stems from the fact that after Kazan named names, he thrived. In fact, it’s hard to name another person who made such a high percentage of his great, well-remembered films after he named names. While other people were forced to leave the country to work, or to ply their trades under assumed names and for extremely reduced rates, Kazan was triumphing. And perhaps most galling to some, Kazan apparently took his cooperation with the committee as inspiration, infusing the themes of betrayal, informing, and even the conflict between leftist idealism and rugged individualism into a string of movies made immediately following Kazan’s testimony.

It's a difficult question. When a filmmaker does terrible things, does that invalidate their work? This is an early litmus test in separating the art from the artist.

Another week of Choose Your Own Adventure.